Printed on a rigid substrate, dibond composite aluminum panel, it will next be cut-out on a cnc router. All the white areas will be cut away. Aluminum stand-offs will be put behind to hang and float off a wall.

Printing on rigid substrates opens up a new avenue of exploration in my work by allowing my geometric constructs to expand beyond the confines of square and rectangular formats with use of a Computer Numerical Control (CNC) Router that can cut the substrate panel to my specifications.

Fabrication of this artwork is made possible with an ADAP grant from the Ohio Arts Council.

The kite shape I’m using in this piece is the one below. It looks different than the kite above but it’s still a kite. It has two pairs of equal-length sides adjacent to each other and it’s diagonals are perpendicular to each other. It’s basically been squashed where the horizontal diagonal is smaller than the vertical diagonal (shown by dashed lines) as opposed to the more traditional shape, as shown in the illustration above whereby it’s the opposite; the horizontal diagonal is longer than the vertical diagonal. 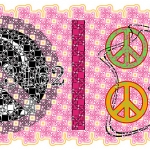 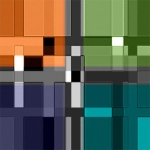 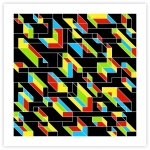 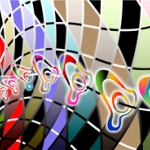 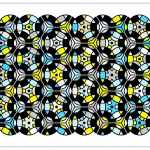 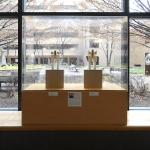