Here I celebrate the underappreciated asterisk. The hashtag is getting all the fame. But before the hashtag became so celebrated with the advent of instagram, the asterisk has been used throughout the ages. The iconography of the Asterisk is deeply embedded in the human psyche. The original literal meaning of asterisk is “little star”. The symbol of the asterisk, ubiquitous today, used in computer language and mathematics has ancient roots going back to pre-history in cave paintings by ice age humans (https://youtu.be/hJnEQCMA5Sg). From there it has gone on throughout history to be used in many ways, literature, mathematics and today in the languages of computer code. And lets not forget it’s use in todays language to tone down expletives, a common example being f**k. Where would we be without the diminutive asterisk.

ASTERISCUS III is an exploration of geometric abstraction utilizing symbols, in this piece a specific asterisk from the Unicode Standard. The asterisk symbol has ancient roots, utilized throughout history by different cultures for different purposes. It has become a universal symbol, incorporated into the fabric of technology through the Unicode Standard. Into this form, I’m weaving color and bold black and whites to optically energize the multi-layered composition. The symbol used in ASTERISCUS I is the Unicode Standard designated as U+1F7BA, the designation given to the symbol given the name “Extremely Heavy Six Spoked Asterisk”. The Unicode Standard designates all symbols, giving them coding data that can be uniformly used in technology internationally. U+1F7BA is distinguished from other asterisks in the Unicode Standard by the thickness of its spokes versus more delicate asterisks in the code. Transforming this symbol from something of use in computer code, language, telecommunications and mathematics into the realm of geometric object is an expression of technology transformed to an aesthetic that speaks to our technological times. 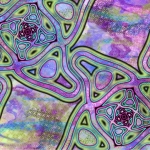 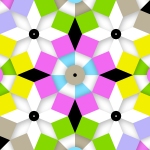 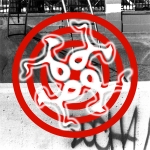 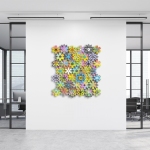 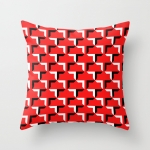