These multi-layered cnc cut artworks are an exploration of geometric abstraction utilizing symbols, in this piece, the underappreciated Asterisk.

The hashtag is getting all the fame. But before the hashtag became so celebrated with the advent of instagram, the asterisk has been used throughout the ages. The iconography of the Asterisk is deeply embedded in the human psyche. The symbol of the asterisk, ubiquitous today, used in computer language and mathematics has ancient roots going back to pre-history in cave paintings by ice age humans.

Paleoanthropologist Genevieve Von Petzinger studies the origins of graphic communications of early humans and as her list of symbols found in early human cave paintings shows, what we know today as the asterisk and the pound/number/hash symbol are from our beginnings. She says in her TED Talk Why are these 32 symbols found in ancient caves all over Europe?

Early writing systems didn’t come out of a vacuum. And that even 5,000 years ago, people were already building on something much older, with its origins stretching back tens of thousands of years, to geometric signs of Ice Age Europe and beyond, to that point deep in our collective history, when someone first came up with the idea of making a graphic mark, and forever changed the nature of how we communicate.

From there it has gone on throughout history to be used in many ways; literature, mathematics and today in the languages of computer code. And lets not forget it’s use in todays language to tone down expletives.

The digital age has encoded the asterisk symbol into the system known as the Unicode Standard. The Unicode Standard is a character coding system designed to support the worldwide interchange, processing, and display of the written texts of the diverse languages and technical disciplines of the modern world. The Unicode Standard designates all symbols, giving them coding data that can be uniformly used in technology internationally. As a starting point in my exploration of the asterisk as subject matter, I went to the Unicode Standard website and found multiple versions of asterisks with different sizes and thicknesses of lines. The symbol I used in these artworks is the Unicode Standard U+1F7BA, the designation given to the symbol named “Extremely Heavy Six Spoked Asterisk”. U+1F7BA is distinguished from other asterisks in the Unicode Standard by the thickness of its spokes versus more delicate asterisks in the code. Transforming this symbol from something of use in computer code, language, telecommunications and mathematics into the realm of geometric object is an expression of technology transformed to an aesthetic that speaks to our technological times.

My husband Bruce and I were watching the show CBS Sunday Morning (January 9), as we often do and suddenly, totally surprised, there it was, my “Eye Sun” flashing on the screen for just a couple of seconds after a segment about TikTok. The segment was about the rise of comedians on TikTok including the comedian star Adam Waheed with over 15 million TikTok followers and comedians Harry Leibow, Sarah Barnitt and Sam Ramsdell.

Another one of my suns appeared on the show 3 times in the past. Jessica Frank, the CBS “Sun Queen” had emailed me the day before on Saturday that another sun I had submitted was going to air but I didn’t look my emails on Saturday, hence it was a surprise. We’re glad we didn’t know in advance as it’s surprise lifted our spirits. Something we needed.

See these earlier posts about my other sun that aired multiple times on CBS Sunday Morning.

I usually don’t talk about my medical condition but my art and these newest works are connected to what I go through with my health. It’s uncomfortable to talk about publicly as what I most don’t want by doing so is pity, but only to help make transparent where my art comes from. So here I go.

Because my spine is fused from the beginning of my cervical disks all the way down to my first lumbar disc, what’s left, my lumbar and sacrum is not happy. With so much fusion, there are great stresses on my lumbar region causing herniations. The stresses on my sacrum cause my pelvis to slip out of alignment. In addition at L4-L5 there is severe stenosis which is a narrowing of the space in the discs that impinge on the spinal cord and the nerve roots exiting each vertebrae. Nerve block injections have given me only some pain relief. My mobility isn’t good. Walking is painful. Standing for extended time is difficult. Sitting for extended time is difficult. There are other complications; Nerve pain in my extremities, Occipital Neuralgia and more… OK, I got that out of the way.

What does that have to do with my art and in particular, these pieces?

I struggle with depression. I’ve had to lie in bed for extended periods of time. I’ll watch TV; the news, Netflix and Amazon streaming, listen to music and listen to audio books, currently “A Gentleman in Moscow” that I highly recommend.  But sometimes I find concentrating on these things difficult. Every day I take a nap in the middle of the day. I don’t always sleep during naps, often going in a daydream state and imagine and formulate art in my head. The last work I completed was Hash ONE, a large hash symbol constructed by putting together 28 hash symbols. During some of these naps, it came to me that I could put these hash symbols inscribed within trapezoids together in a grid and with this grid, spell out words. Furthermore, I could make a hashtag. But what hashtag? I thought about what I’m grateful for, among other things that I have the love of my husband for 40 years. There it was; #LOVE.

During this holiday season, with the crazy time in history that we find ourselves in, with so many who have died, and so many struggling, with so much division, racism, homophobia, with our democracy in peril….I hope that this simple hashtag may speak to you for the love that you have in your lives as an uplifting message. As John Lennon and Paul McCartney wrote, “All You Need is Love” 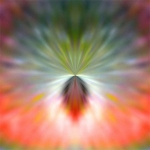 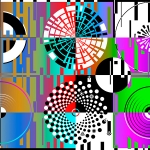 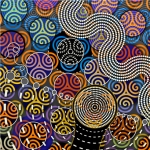 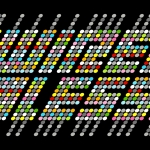 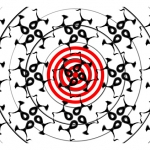 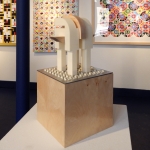