I was commissioned by the Cleveland Public Library in partnership with Land Studio to create a 10 x 30 foot art wall for the South Brooklyn neighborhood branch as part of CPL’s SEE ALSO public art initiative. My work QUADRATALUX will be up for one year.

About the Art:
An outgrowth from my architecture, the tenants I learned about making buildings; structure, composition and the grid, to name some, are relevant to making art as well and they are my guiding principles. In QUADRATALUX, I use geometry and color in an optically energetic composition to instill a feeling of kinetic motion and energy representing a joyous visual song and little piece of me that has been freed from pain.

About See Also:
See Also is a library term for “Look Here”. The series brings innovative and thought-provoking temporary works of art each summer to the Eastman Reading Garden at Cleveland Public Library’s main branch and murals to neighborhood library branches throughout the city.

I’m using the 3d medium as a new way to make 2d prints. This is a new artistic process for me. When I made a 3d printed Hash sign for the recent W/O Limits exhibition at the Artists Archives, https://andrewreach.com/escape-hash-3d-printed-sculpture…/ I first did renders of it to study the form. A lightbulb went off in my head and I realized I could take these renders, export them out and transform them into 2d cnc cut-out prints.

This hash sign was modeled in Blender and transformed into this 2d print.

My 3d explorations of the Hash symbol began with the realization that if you inscribed a hash symbol, you would get a Rhombus, that is both pairs of opposite sides are parallel and the same length. So when Megan Alves, Artists Archives Marketing and Program Manager asked me if I wanted to do a 3d printed tactile touchable artwork for the exhibition W/O Limits, I was honored and I immediately knew it would be the hash symbol I would make. So, I went back to its shape, a rhombus and realized that when putting together 6 of these in cubic form it makes a Rhombohedron. https://en.wikipedia.org/wiki/Rhombohedron The rhombohedron would become the building block of the sculpture. My Hash Symbol Monument would follow.

So that brings me to this artwork. Utilizing two 3d programs, Moment of Inspiration (MOI) for the 3d modeling, and Blender for visualization and rendering, I have found these to open up new avenues of expression in 2d. I can take a 3d model and have unlimited viewpoints and lighting to play with. This piece is an orthographic projection where lines are parallelly projected as opposed to a perspective view with vanishing points.

The idea for this piece first began when I started creating artwork with the hash symbol. We all know this symbol from the earliest age when we start using the phone and where it resides in the lower left hand corner of the keypad. On the phone we refer to it as the pound sign. We also see this symbol when referencing a model number, case number etc. and is thus known in this context as the number sign. But now in our digital revolution, the symbol being used in the context of social media and platforms, the hash symbol, has been appropriated for use in hash tagging. In 2007, Chris Messina had the idea to start using hashtags on Twitter. They are now used by millions around the world.

Paleoanthropologist Genevieve Von Petzinger studies the origins of graphic communications of early humans and in her TED Talk Why are these 32 symbols found in ancient caves all over Europe?, she explains the early human origins of symbols which include what we know today as the pound/number/hash symbols (see illustration above, top row third from the right).

Back to the artwork. After working in 2d with the hash symbol, I was asked if I wanted to make a 3d printed tactile sculpture for the visually impaired for the exhibition W/O Limits at the Artists Archives of the Western Reserve. What I created is a sculpture of the hash symbol comprised of 72 blocks each with a hash symbol carved into it in alternating negative and positive relief. To visualize it, I did multiple renders of the 3d model and I noticed the beauty of the variables at play; the different perspective angles it could be viewed from; the variation of lighting I could apply to get just the right shadows to reveal the forms. It occurred to me that I could capture the 3d form from these renders and turn it into a digital print. So from 3d, I’ve brought it into the realm of 2d as a bold print on acrylic, cut out on a router. Deeply cast shadows reveal the forms of the blocks while its perspective angle creates the optical illusion of it projecting off the wall. 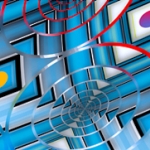 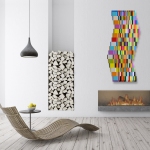 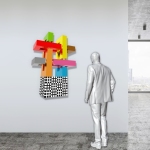 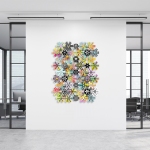 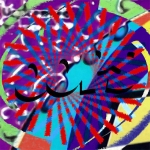